Downtown redevelopment has been an ongoing city priority now for 35 years — initiated by residents in 1982’s Town Center Plan and subsequently reaffirmed by community-driven Strategic Plans in 2000 and 2010.

Though details and circumstances vary on a project by project basis, each new project, guided by the city’s Downtown Development Authority and governed by our Unified Development Ordinance, seeks the ideal outcome of an upward trade. That is, one in which the city and its residents emerge better served by redevelopment than by the circumstances that preceded it.

A case in point: With demolition, disassembly, and asbestos abatement work now safely completed, Cousins and their development partner AMLI Development Company are set to move forward on the long-planned redevelopment of the Callaway Building site at 120 W. Trinity Place in downtown Decatur. As they do, we’re afforded a timely opportunity to examine how such projects can serve city goals, foster community interests, and ultimately benefit residents city-wide.

The project itself mixes a variety of commercial and residential uses, making it more responsive over time as market trends inevitably shift. It will include 329 residential units, 65% of which are studio and one bedroom dwellings; 18,000 square feet of retail space; and Decatur’s first new office building in over 20 years, providing 33,750 square feet of Class A office space.

Notably, the project will finally return the site’s 4.7 acres to the city’s tax rolls, reversing DeKalb County’s tax exempt status that’s been in effect for the past half century.

As a $60 million construction effort receiving no tax incentives, the project will contribute roughly $560,000 a year to the City Schools of Decatur and $280,000 a year to the city’s General Fund. Furthermore, developers have purchased excess stormwater capacity from the city’s new Ebster Park facility via a one-time impact fee of $450,000.

Decatur’s Tree Canopy Conservation Ordinance, which stabilized the city’s overall canopy percentage at 45% and now fosters equal or greater coverage city-wide for the years ahead, requires Callaway site development to include a full canopy replacement plan.

That plan will result in the planting of 137 native trees that range in height from 10’ to 15’ at planting with increasing height and shade in the years ahead. Featured species will include Oaks, Elms, Hornbeams, Dogwoods, Hemlocks, and Cedars, among others. All are scheduled to be planted directly on the Callaway property and, despite existing site trees scheduled to be lost to construction, will result in a net downtown gain of roughly a hundred trees, as well as increased downtown canopy over time.

Furthermore, the city is presently working with the developer to transplant up to six healthy, existing site trees to Decatur Housing Authority property across Commerce Drive.

Though the planned W. Trinity cycle track, together with the relocation of a major Georgia Power underground power line, will require the removal of existing street trees along that stretch, each tree will be replaced during redevelopment, together with additional streetscape enhancements such as street lamps, benches, and trash/recycling receptacles.

Once complete, the project will offer parking/locking facilities for a minimum of 30 bicycles.

The development will be downtown’s first commercial project to comply with the city’s high performance building ordinance. Developers of the project are presently seeking LEED Silver certification and remain hopeful they may ultimately qualify for Gold. Demolition of the Callaway building featured a full reclamation effort and resulted in 8,748,000 pounds of recycled concrete, 667,070 pounds of recycled metals, and 3,998 pounds of recycled bulbs and ballasts.

Public Space and Other Specifics

The project overall varies between 4 and 6 stories and falls within the 80 foot height limitation imposed by the city’s Unified Development Ordinance. The N. McDonough side of the project will feature an internal public plaza with fountain, fronted all around by commercial and live/work spaces and allowing for pedestrian access across and throughout the site. The approved site plan is below (click for larger view). Residential is shown in yellow; street-level commercial, some of which has residential above, some of which has office, is indicated with blue. 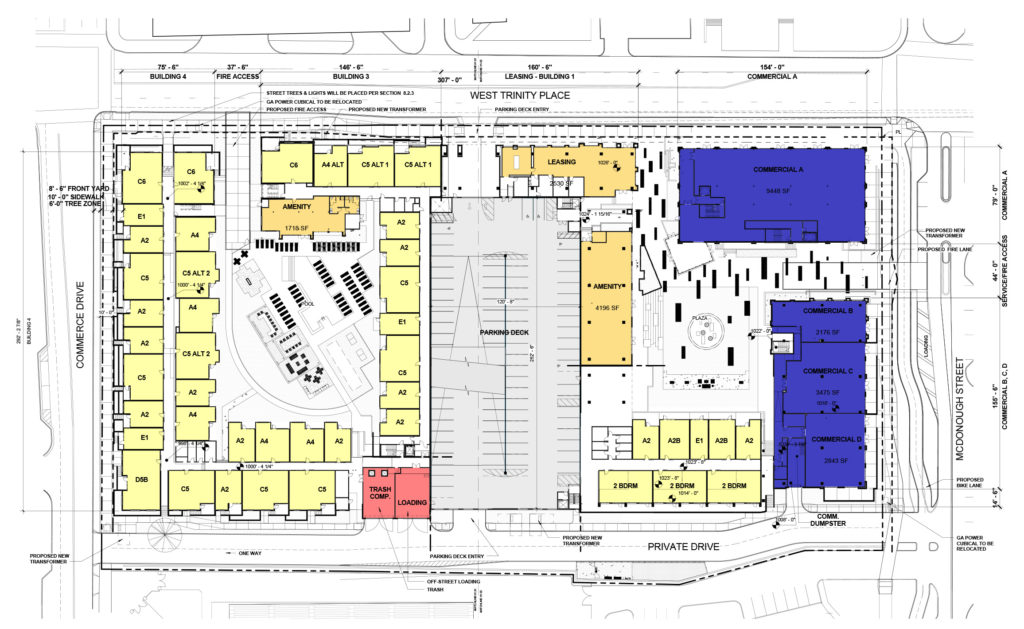 A land disturbance permit is in the course of being issued so that site work can officially begin. As it does, the city will be working very closely with the construction team, City Schools of Decatur, McDonough streetscape teams, and others to ensure safe and orderly construction activities. The project is expected to conclude by spring of 2019.